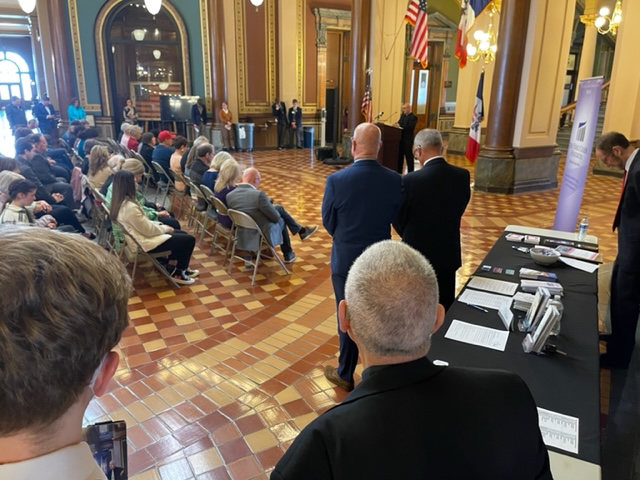 Thanks to the many of you who contacted your lawmakers about Senate File 2354, the “Iowa MOMS” bill. If you haven’t had an opportunity, click here for a sample message to your legislators. The bill would provide funding to agencies for support of pregnant women and new moms. It also extends services for new mothers on Medicaid to a year after the birth, rather than only two months.

Father Joe Pins offers a prayer at the Rally for Life.

Iowa MOMS will put the state squarely on the side of childbirth and supporting women. The money could only go to life-affirming agencies that don’t refer for or perform abortions.

You can check out some photos from last week’s Prayer Rally for Life at the Capitol on our Facebook page.

Other action alerts on our website support funding for private school scholarships as well as oppose “cashless gambling” and cuts in unemployment insurance benefits.

The Iowa House has passed several departmental appropriations bills and sent them to the Senate.

The health and human services budget bill is also set for passage in the House Appropriations Committee later today (Monday).

The House and Senate have passed different versions of legislation that would cut unemployment insurance benefits.

Both versions of House File 2355 reduce the maximum number of weeks to receive benefits from 26 to 16 weeks and require workers to take lower-paying jobs sooner. The Senate version includes a one-week waiting period for benefits; the House version does not. It remains to be seen how the chambers will reconcile the proposals. The bill is opposed by the ICC. We caution against changing the unemployment insurance system in ways that could harm vulnerable workers.

We were pleased that Senate File 522, which creates criminal penalties for elder abuse, passed the Iowa House. It goes back to the Senate following some technical amendments.

BISHOPS SPEAK OUT ON EFFORTS TO HELP COUPLES WITH UNEXPECTED PREGNANCIES

In anticipation of the Supreme Court of the United States issuing its ruling in Dobbs v. Jackson Women’s Health Organization, Archbishop José H. Gomez of Los Angeles, president of the U.S. Conference of Catholic Bishops (USCCB) and the chairmen of USCCB committees serving women and families issued the following statement:

“As our nation awaits the U.S. Supreme Court’s decision in Dobbs v. Jackson Women’s Health Organization, we join together in prayer and expectant hope that states will again be able to protect women and children from the injustice of abortion. As we affirm the value of every human life, we welcome the possibility of saving countless unborn children as well as sparing women and families the pain of abortion.

“We recommit our committees and urge our dioceses, parishes, and Catholic agencies and institutions to redouble our efforts to accompany women and couples who are facing unexpected or difficult pregnancies, and during the early years of parenthood, offering them loving and compassionate care through initiatives such as Walking with Moms in Need and countless others.”

Don’t forget that you can use our system to contact your Senator and Representative about any issue at www.votervoice.net/icc/home.