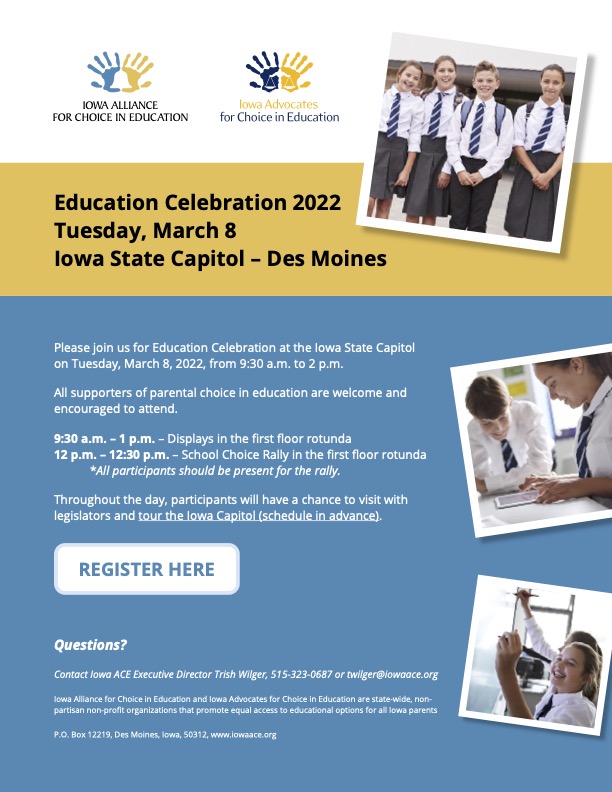 It will be a busy week at the state Capitol. The first legislative deadline is Friday, when a bill must pass its first committee or it’s dead for the session. Taxation and appropriations bills are not subject to the “funnel” deadline.

Please visit our Action Center at www.iowacatholicconference.org/voter-voice and send a message to your legislator about any of the following issues.

Thanks to the many of you who sent a message to legislators last week in support of parental choice in education. Several bills have been introduced to provide some parents with Education Savings Accounts (Students First scholarships) to help them afford tuition to a Catholic school.

The Education Celebration in support of nonpublic schools will be held at the State Capitol on Tuesday, March 8. The rally is scheduled for noon. Here’s a link with more information.

A religious freedom bill, Senate File 2170, passed a subcommittee last week and we are working to get the bill through the Senate Local Government Committee in advance of the legislative deadline.

SF 2170 allows for religious freedom as far as possible but restricts it when the government has an important interest that must be preserved. This type of law protects minority religions and could be helpful for Catholic hospitals and providers from being required to provide abortions and other objectionable procedures.

More than 30 states have a very similar law or provision due to court action. Here’s a list of the committee members if you’d like to help.

House Study Bill 698 was introduced last week and combines the multiple public assistance/SNAP (food stamp) bills we have seen this year into a single bill. The good news is that the most harmful provision, a new asset limit for SNAP, has been removed. There are a couple of pieces that might make it more difficult for people to receive benefits, but the new bill is an improvement.

There’s a public hearing today on the House’s “flat income tax” bill, House File 2317. The governor and Senate also have versions of the bill, which would eventually cut Iowa’s income tax to a rate of about 4% for everyone regardless of income.

A projection from the official Legislative Services Agency says HF 2317 would eventually cut annual receipts by about $1.6 billion. Iowa’s general fund receipts are currently around $9 billion. The state has a general fund balance of $1.24 billion and nearly $1 billion in cash reserves.

The main concern the ICC has expressed is whether these proposed changes would affect the state’s ability to help care for those in need or pay for other expenditures that support the common good. We’ll keep you posted on the legislation’s progress.

The ICC supports House Study Bill 607, which would reduce punishments and collateral consequences that come from noncriminal “technical” probation violations (such as missing a meeting). The plan is to not send people back to prison unless it’s necessary. The bill would also create incentives for offenders to seek education. The bill might be considered by the House Public Safety Committee this week. Click here for a link to Public Safety Committee members.

More than $7 billion was expected to be gambled on the Super Bowl. There’s a bill in the Iowa Legislature, opposed by the ICC, to allow “cashless wagering” (House Study Bill 578). Cashless wagering means you could transfer money directly from your phone to the slot machine and avoid the walk to the ATM. There is nothing in the bill which would stop people from emptying their bank account without getting up from the machine.

We know that a lot of gambling is by people who really can’t afford it. Does Iowa really want to go to cashless wagering right now following the rapid increase in legal sports betting?

As you recall the ICC has supported legislation to help mobile home residents. There is a bill set to be considered in the House Judiciary Committee, House File 833, which would extend the required notice of a rent increase from two to three months.

Have a Happy Valentine’s Day, and pray for those who might not be feeling God’s love!