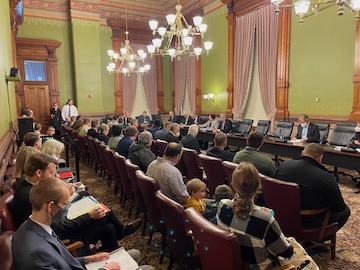 Last Friday was the first legislative “funnel” deadline when bills were required to pass out of a committee to remain eligible for further consideration. (Budget and tax bills have no deadline.)

This week, attention will turn to floor debate of bills that have been passed by their first committee.

The governor’s bills to provide Students First (Education Savings Account) scholarships for some parents to send their children to any nonpublic school survived the deadline. Senate Study Bill 3080 passed the Senate Education Committee on Thursday. House Study Bill 672 was referred by the Speaker to the House Appropriations Committee.

Gov. Reynolds held a news conference about the “Students First” plan at St. Theresa School in Des Moines last Tuesday. We put some photos on our Facebook page.

The governor also signed a bill setting state public school funding at $3.58 billion next year, an increase of 2.5%. Teachers (including those in Catholic schools), police officers and corrections officers, and childcare workers will begin to receive $1,000 pandemic bonuses. The bonuses will be for teachers who stayed on the job through the pandemic and continue teaching next school year.

Senate Study Bill 3145, the “Iowa MOMS” bill (More Options for Maternal Support) bill, passed the Senate Human Resources Committee last week. “Iowa MOMS” would provide $2 million for groups that have a commitment to promoting healthy pregnancies and childbirth, instead of abortion, to provide services such as:

The bill would also provide $3.1 million for a year of continuous postpartum coverage under the Medicaid program for mothers. This is a welcome increase from two months.

This proposal might become especially important in a state like Iowa that has a fundamental right to abortion. This Wednesday, Feb. 23, the Iowa Supreme Court will hear arguments on a challenge to Iowa’s law which required a 24-hour waiting period before an abortion can take place. Click here for more information. We are hopeful that the Court will uphold the law and reverse its 2018 decision which made abortion a fundamental right in Iowa.

A bill to extend the “safe haven” law for newborns from 30 to 60 days, House File 2420, passed the House Human Resources Committee.

Unfortunately, a bill to provide more transparency with abortion complications didn’t make it past the deadline.

On Feb. 28, the U.S. Senate is set to vote on a motion to begin debate on H.R. 3755, the so-called Women’s Health Protection Act of 2021.  It’s the most extreme pro-abortion bill our nation has ever seen.

This bill would impose abortion on demand nationwide at any stage of pregnancy through federal statute and would eliminate pro-life laws at every level of government. Keep an eye on the U.S. bishops’ Action Center for an updated sample message to Congress soon.

It doesn’t seem like Senate Democrats will have the 60 votes needed to move the legislation forward, but the whole thing is troubling. 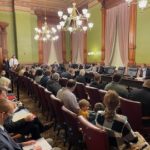 The “Church Freedom” bill, Senate File 2284, passed the Senate Local Government Committee on Tuesday. The bill allows for religious freedom as far as possible but restricts it when the government has an important interest that must be preserved. There is a similar bill, House File 2437, that passed the House Judiciary Committee.

The Iowa House passed its version of the “4% income flat tax” last week and sent it to the Senate. The governor’s proposal also cuts the corporate tax rate to 5.5%. The Senate GOP plan cuts it to about 8% and gets rid of about $140 million worth of business tax breaks. You have an opportunity to learn more about the proposals and contact legislatorson our website.

We are monitoring a bill to improve the verification systems to receive public assistance. House File 2438 was approved last week by the House Human Resources Committee.  There would be more stringent ongoing verification of recipients’ financial and employment records. Since low-income people’s job hours and income can change often, we are concerned that this might put people “on and off” of benefits and create additional uncertainty for their families. On the bright side, the bill might make for easier application procedures.

A bill to allow “cashless wagering,” House Study Bill 578, passed the House State Government Committee last Tuesday. The bill would allow a direct connection between your bank account in your phone and the slot machine in casinos. The ICC is concerned about it becoming frictionless for people to lose their money.

House Study Bill 607 didn’t make it out of committee. The bill would reduce punishments and collateral consequences that come from noncriminal “technical” probation violations (such as missing a meeting). The plan is to not send people back to prison unless it’s necessary.

The ICC appreciates that House File 2422 was introduced last week, but there wasn’t time to get it out of committee. To encourage marriage among single-parent households, the income of a new spouse would be disregarded for two years for the purpose of continuing eligibility for welfare benefits. The idea is that the new family could start some savings.

Iowa Catholic Conference staff will be presenting at a couple of events coming up on Thursday, March 3.

At noon, we will talk about “Targeted Advocacy” and the ICC’s legislative priorities in the Diocese of Davenport’s Lunch and Learn series. To sign up go to http://bit.ly/DioDavLunchLearn.

“The Two Feet of Love in Action” will be live and streaming from the University of Iowa’s Newman Catholic Student Center at 7 p.m. There will be discussion of Catholic Social Teaching, advocacy and discerning your call to act.