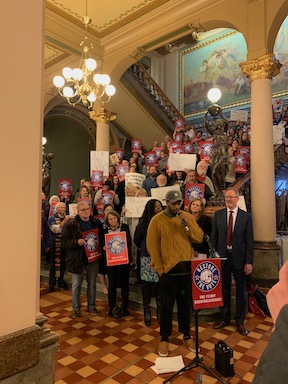 If you would like to receive text alerts from the Iowa Catholic Conference, text the word IOWACATHOLIC to 50457.

Gov. Kim Reynolds signed an executive order this morning returning the right to vote for many people who have committed felonies and served their prison sentence. Those convicted of homicide are not included. While returning citizens still are obligated to pay restitution, full payment of the obligation is not required to be able to vote. We appreciate Gov. Reynolds issuing the executive order.

Our Catholic tradition supports the community’s right to establish and enforce laws that protect people and advance the common good. But our faith also teaches us that both victims and offenders have a God-given dignity that calls for justice and restoration, not only punishment.

Iowa is the only state that by law permanently strips people with a felony conviction of their right to vote. The Iowa Catholic Conference continues to support a state constitutional amendment to end lifetime disenfranchisement in Iowa.

It’s time to let Senators Ernst and Grassley know where you stand. Congressional leaders are apparently in the final days of negotiations on a COVID-19 relief bill that risks leaving out some people who are suffering hardships. Here’s more information and a sample message you can send to the Senators: https://www.votervoice.net/USCCB/campaigns/75712/respond.

On July 28, U.S. Department of Homeland Security Acting Secretary Chad Wolf issued a memorandum adding limitations to the Deferred Action for Childhood Arrivals (DACA) program. The memorandum was issued in response to the recent 5-4 decision by the Supreme Court of the United States striking down the Trump Administration’s September 2017 attempt to end the DACA program. The new changes outlined in the memorandum would cut DACA’s youth work authorization from two years to one year and would not allow new DACA applicants.

Currently, there are approximately 670,000 DACA recipients working and studying legally in the United States, many of whom are performing essential services and are active leaders such as military veterans, academic standouts in universities, and leaders in local communities. DACA recipients are estimated to contribute $42 billion annually to the U.S. economy.

The bishops are asking the President to reinstate the original protections that DACA provides to young people currently enrolled in the program, as well as to begin accepting new prospective DACA applicants. Congress is asked to pass legislation to provide a path to citizenship for Dreamers.