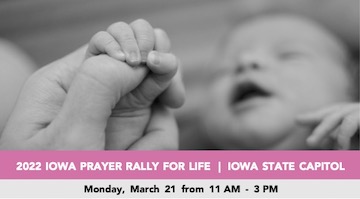 The Iowa Catholic Conference lifts up our prayers for the victims of the tornados that ripped across the state Saturday night.

The Education Celebration for nonpublic schools takes place tomorrow (Tuesday) at the State Capitol.  There will be a rally at noon as well as a subcommittee meeting for the Students First scholarship bill in the House (House Study Bill 672). The ICC supports the bill to help additional parents afford tuition to a Catholic school.

Public school students who either have household income of 400% of the federal poverty level or less, or have an individualized education plan, would be eligible to apply. Incoming Kindergarten students meeting these income guidelines are also eligible.

If you are a constituent of a member of the House Appropriations Committee, you can send a message in support.

The Senate version of the Students First bill (Senate File 2369) passed the Senate Appropriations Committee last week. A review by the Legislative Services Agenda estimates that the bill would save the state’s budget about $24 million.

There’s a subcommittee meeting in the House today for Senate File 2197, which would establish a task force to discuss special education support for students at nonpublic schools.

Bills to cut Iowa’s unemployment insurance benefits for laid-off workers are eligible for debate but have not been voted on yet. The ICC opposes these provisions. Click here for more information and a sample message to your legislator.

Senate File 522, which creates criminal penalties for elder abuse, passed a subcommittee in the House. It passed the Senate unanimously last year. The bill is supported by the ICC.

Unfortunately, the Iowa House passed the “cashless gaming” bill by a vote of 71-28 and sent it to the Senate. This is one of those rare bills where there was a significant mix of Republican and Democratic votes on each side. This will enable a “frictionless” way of feeding slot machines from a phone app. The Church does not oppose gambling as such but this bill could make it much easier for people to spend all their money quicker.

House File 2420, a bill to extend the “safe haven” law for newborns from 30 to 90 days, passed the Iowa House 99-0. This enables parents to drop off an infant at a safe place if the parent feels they cannot care for the child. It has been used about 50 times since it came into effect about 20 years ago. The ICC supports the bill, which moves to the Senate.

Senate File 577 passed a House subcommittee. The legislation passed the Senate last year. It provides the possibility of a birth certificate for “non-viable” children and is intended to help with the healing of some families who have suffered a miscarriage. 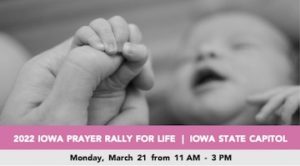 The 2022 Iowa Prayer Rally for Life will be held at the State Capitol on Monday, March 21. At 11 a.m., ICC staff and others will be in Room 315 to help attendees prepare to lobby legislators on important issues. The rally itself will be held in the rotunda at 1 p.m. Hope to see you there!

Tens of thousands of Afghans and their families have arrived in the U.S. to be resettled and are now in need of a pathway to real and lasting safety. Catholic Charities of Des Moines is one of the resettlement agencies.

Most Afghans are arriving with a type of immigration “parole,” which only temporarily allows people fleeing danger to remain in the U.S. These Afghans will need to find another pathway to remain in the country permanently once their parole expires.

Congress needs to hear from you in support of the Afghan Adjustment Act, patterned after similar legislation such as the Cuban Adjustment Act following the Cuban Revolution. It would offer an important correction by allowing these Afghan evacuees to apply to become lawful permanent residents, the same permanent status they would have received had they been admitted through the U.S. Refugee Admissions Program (USRAP). Rather than penalizing our new Afghan neighbors for being evacuated by the U.S government, Congress has an urgent moral obligation to ensure they have a chance to integrate fully and thrive within our communities.

Click here to send a message to your members of Congress.

Last week the U.S. Senate voted against advancing the Women’s Health Protection Act, H.R. 3755. This bill would have imposed abortion on demand nationwide at any stage of pregnancy through federal statute and would have eliminated pro-life laws at every level of government – including parental notification for minor girls, informed consent, and health or safety protections specific to abortion facilities. H.R. 3755 would have compelled Americans to support abortions here and abroad with their tax dollars.

The U.S. Conference of Catholic Bishops is sponsoring a novena to St. Joseph for those on the path to adoption. It starts this Thursday and continues until the Feast of St. Joseph.