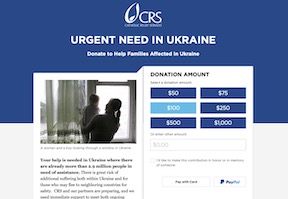 ICC BOARD PRESIDENT CALLS FOR PRAYERS FOR UKRAINE 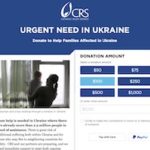 Bishop R. Walker Nickless, bishop of Sioux City and chair of the Iowa Catholic Conference board, has called for prayer following the invasion of Ukraine by Russia. “Our brothers and sisters in that country are suffering from this aggression. We fear the people of Ukraine will continue to experience death and destruction of their homes in the days to come … We ask our Blessed Mother, Mary, Queen of Peace to pray for us for an end to war,” he said.

One way to help the people of Ukraine is through Catholic Relief Services.

The U.S. Conference of Catholic Bishops has issued an action alert in opposition to the “Women’s Health Protection Act,” which is the most extreme pro-abortion bill ever to be considered in Congress. A vote is scheduled later today in the U.S. Senate; however, the measure is expected to fail. You can send a message in opposition here.

Senate File 2354, the “Iowa MOMS” bill, has been referred to the Senate Appropriations Committee. It would provide funding for many groups to provide services for pregnant mothers. We’ll keep you posted on its progress.

The Iowa Supreme Court heard arguments last Wednesday on the challenge to Iowa’s law which required a 24-hour waiting period before an abortion can take place. We are hopeful that the Court will uphold the law and reverse its 2018 decision which made abortion a fundamental right in Iowa.

The Iowa court’s decision is expected in late June, as is the U.S. Supreme Court’s decision on the Mississippi law stopping abortions after 15 weeks (the ‘Dobbs’ case).

Bills to cut Iowa’s unemployment insurance benefits for laid-off workers are eligible for debate but have not been voted on yet. The ICC opposes these provisions. Click here for more information and a sample message to your legislator.

The Legislature completed work on its tax cut bill (HF 2317) on Thursday evening. The bill would gradually cut the tax rate for everyone to a flat rate of 3.9%. Among other provisions, the bill eliminates taxes on retirement income in Iowa, lowers the corporate tax rate if certain revenue triggers are met, and decreases some corporate tax credits.

The nonpartisan Legislative Services Agency predicts the changes will reduce annual revenues to the state’s general fund by somewhere around $1.9 billion by FY 2028. The state’s general fund budget is currently a little more than $8 billion. Republicans counter that the economy will grow so revenues will continue to rise. The Taxpayer Relief Fund contains over $1 billion and would be used in the event that revenue growth projections do not hit 3.5%.