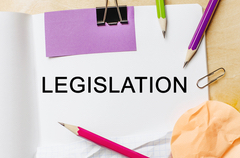 Catholic schools save the state’s budget and taxpayers millions of dollars every year. Click here for an infographic.

In other news, the Iowa House has passed HF 756, the weapons omnibus bill, and sent it to the Senate. It’s on today’s debate calendar so if you’re interested in contacting your legislators you should do so today.

Among the provisions of HF 756:

A permit or background check would no longer be required for sales between private citizens.

It would be unlawful for private sellers to sell to anyone that they “know or reasonably should know” may not purchase a firearm. (If a gun is purchased from a federally licensed dealer, a background check on the buyer is required by federal law. One could obtain a permit to avoid having to get a background check each time a weapon is purchased from a federally-licensed dealer.)

A permit would no longer be required to carry weapons.

The bill would also prevent local government from regulating the carrying of weapons.

The bishops of Iowa oppose the bill because of concern about removing the requirement to have a valid permit to acquire a weapon or to carry a firearm in a city.  The right to bear arms can and should be balanced with regulations that are compatible with the Second Amendment. Proponents say the bill will benefit those who need a gun right away.

Unfortunately, the Iowa Legislature passed SF 252 and sent it to the governor. This is the bill that prohibits local ordinances that stop landlords from rejecting renters solely for paying for rent with federal housing vouchers. Over time, some tenants with unscrupulous landlords could lose their housing as a result of the bill. The only piece of good news is that an amendment put off the effect of the bill until January 2023.

SF 295 has passed a Senate Ways and Means subcommittee with the support of the ICC. The bill contains a tax credit for developers to start affordable housing projects, an eviction prevention program and disaster recovery housing assistance.

These bills opposed by the ICC must be passed by a second legislative committee by April 2, or they are considered dead for the session:

SF 492 and HF 754 have not yet been brought up for debate in either chamber. The bills would cut unemployment benefits for bigger families and provide a new one-week waiting period before benefits would kick in.

SF 389 adds a new asset test before being able to receive nutrition assistance. The bill has not yet been considered by a subcommittee in the House after coming over from the Senate. Proponents have said it would kick about one out of six food stamp recipients off the program.

HF 434, providing for OTC contraception, has not reached the House floor.

Everyone deserves to be treated with respect and dignity. According to the United States Conference of Catholic Bishops (USCCB), the Equality Act, which has now passed the U.S. House of Representatives and is being actively considered in the Senate, in many ways does the opposite. Instead of respecting differences in beliefs about marriage and sexuality, the Equality Act would discriminate against people of faith.

The Equality Act would punish faith-based organizations, such as charities and schools who serve everyone in their communities, simply because of their beliefs; force girls and women to compete against boys and men for limited opportunities in sports, and to share locker rooms and shower spaces with biological males who identify as women; risk mandating taxpayers to fund abortions; force people in everyday life, and especially health care workers, to support gender transition; and expand what the government considers a “public” place, forcing even some parish halls to host functions that conflict with Catholic beliefs. Click here to contact our Senators about the bill.

With the support of the USCCB, there is a live seminar being hosted tonight at 7 p.m. by the Archdioceses of New York and Los Angeles, along with the Dioceses of Arlington and Green Bay and the Colorado and Virginia Catholic Conferences to help educate and engage grassroots Catholics against the Equality Act. Click here to sign up.

These are bipartisan bills that would provide a path to citizenship to more than three million immigrant youth, Temporary Protected Status (TPS) holders, Deferred Enforced Departure (DED) holders, and seasonal farmworkers and their families. We’ll keep you up to date on how you can act in support.