Several initiatives of interest have been moving in Congress this summer.

The U.S. Senate passed the “Inflation Reduction Act” earlier this week.  In response to the passage of the bill in the Senate, Archbishop Paul S. Coakley of Oklahoma City, chairman of the U.S. Conference of Catholic Bishops’ (USCCB) Committee on Domestic Justice and Human Development, issued the following statement: 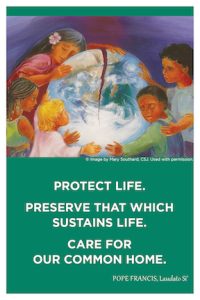 “I am grateful to the Senate for their efforts to support the environment and lower drug prices through the Inflation Reduction Act. It is also prudent that this legislation contains revenue provisions to offset the investments when concerns around inflation and the economy are high. Climate change is a global challenge that requires courageous, long-term action from Congress, and I am grateful for the many substantial climate provisions that bring the United States closer to honoring its emissions reductions goals under the Paris Agreement, which Pope Francis has strongly encouraged us to meet. This is a meaningful effort to care for our common home. Provisions in this package will help to curb greenhouse gas emissions while seeking to safeguard the economy and give preference to the poor.

“I am also grateful for provisions in the bill that will lower prescription drug costs for those who rely on Medicare, and continue to call on lawmakers to ensure all healthcare policy respects the inherent dignity and right to life of every human being.”

Click here for an action alert from the USCCB encouraging policies to protect our common home.

A school choice bill was recently introduced in Congress. It would create a federal tax credit like the Iowa School Tuition Organization tax credit.

Parental choice in education is in the spotlight like never before. Catholic teaching clearly states parents are their child’s first teacher – and the government has a duty to help parents select the educational setting of their choice. (CCC 2229)

The Educational Choice for Children Act (ECCA) creates a new tax credit for donors to education scholarship funds.  Families who meet the income requirements could apply for a scholarship in all fifty states.

Parents have the right to choose the kind of education best suited to the needs of their children. Here in Iowa, the ICC supports public policies that help parents with financial assistance to exercise that right.

If you’d like to encourage your U.S. representative and senators to co-sponsor the bill, click here for a sample message. Rep. Mariannette Miller-Meeks (R) and Rep. Randy Feenstra (R) from Iowa are co-sponsors.

We were pleased to see that the Afghan Adjustment Act has been introduced in Congress. Tens of thousands of Afghans and their families have arrived in the U.S. to be resettled and are now in need of a pathway to real and lasting safety. (Catholic Charities of Des Moines is one of the resettlement agencies.)

Most Afghans are arriving with a type of immigration “parole,” which only temporarily allows people fleeing danger to remain in the U.S. These Afghans need a pathway to remain in the country permanently once their parole expires.

CONGRESS SHOULD PROTECT LIFE AND PROMOTE THE COMMON GOOD

According to the USCCB, since the release of the Supreme Court’s decision in Dobbs v. Jackson Women’s Health Organization, Congress has been taking up some legislative proposals that are harmful to the common good. The U.S. House of Representatives has passed, and the Senate may soon consider, a series of such bills, including the Women’s Health Protection Act, the Respect for Marriage Act, and the Right to Contraception Act, and is advancing appropriations bills that exclude longstanding provisions prohibiting federal taxpayer funding for abortion and protecting the conscience rights of healthcare providers.

Meanwhile, other measures which would help to build up a culture of life have languished: the Pregnant Workers Fairness Act; an expanded child tax credit, including for pregnant moms; the Adoption Tax Credit Refundability Act; the PFAS Action Act; and a federal paid family leave policy.

Click here for the USCCB’s action alerts on these and other issues.

Gov. Kim Reynolds has filed a motion requesting the Polk County District Court to lift the injunction against Iowa’s “heartbeat” law, which prohibits abortion after a heartbeat can be detected. The 2018 law never went into effect because of a previous Iowa Supreme Court decision. Currently, Iowa has a law limiting abortions after 20 weeks of pregnancy.