Legislators wrapped up this week’s work a little early as the chambers began to focus on budget bills. For action alerts from the ICC, go to https://iowacatholicconference.org/voter-voice. We’re asking legislators to:

The Senate Appropriations Committee has introduced its budget bill for the Department of Education, SF 596. There is a proposed increase in funding for textbooks used in nonpublic schools to $852,000, compared to $652,000 last year. The House had suggested an increase in its version as well.

The Senate unanimously passed and sent to the House SF 577, which provides for a certificate for nonviable birth. It provides the opportunity for grieving parents to receive a certificate of non-viable birth for a child who was born but not alive outside the womb. 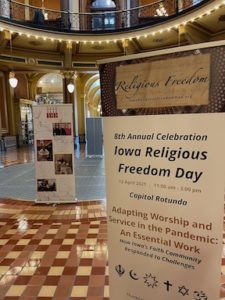 The annual Iowa Religious Freedom Day sponsored by The Church of Jesus Christ of Latter-Day Saints and the Iowa Catholic Conference took place on Tuesday. There were displays in the rotunda with the theme: “Adapting Worship and Service in the Pandemic: An Essential Work.”

There are efforts in Congress to get rid of the “Hyde Amendment” and similar laws which have protected taxpayers for 45 years from being forced to pay for elective abortions. An overwhelming majority of Americans, including low-income women and women of color who are most impacted by it, support these laws. To sign a petition and let Congress know that taxpayer dollars should not pay for abortion, go to www.notaxpayerabortion.com.

The Food and Drug Administration announced Tuesday that they will no longer be enforcing the “in-person dispensing requirement” for chemical abortion pills during the remainder of the COVID-19 public health emergency.

Archbishop Joseph F. Naumann of Kansas City in Kansas, chairman of the U.S. Conference of Catholic Bishops’ Committee on Pro-Life Activities said, “It is difficult to see the FDA’s decision to not enforce important safety protocols as anything other than callous capitulation to the requests of abortion activists without regard for the health and safety of the women involved.”

There is a pilot project taking place in Iowa where women can receive abortion pills by mail after a telehealth visit. An Iowa Supreme Court decision several years ago ruled that the state Board of Medicine could not require an in-person medical visit before women could receive abortion pills. We need the Protect Life Amendment to be passed by the Legislature so reasonable health protections can be put in place.