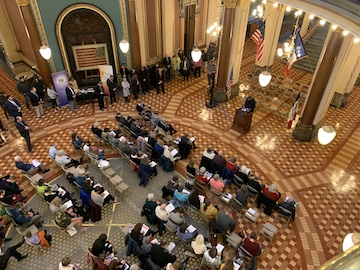 The Iowa Legislature has picked up where it left off after a three-month pause due to the coronavirus. Here’s a report from last week’s action on some bills of interest to the Iowa Catholic Conference:

COMING UP AT THE STATEHOUSE

It is anticipated that the legislature will begin work on budget bills in earnest this week.

The Iowa Supreme Court found a fundamental right to abortion in the state Constitution. The ICC supports House Joint Resolution 2004, which would clarify that our state’s Constitution does not contain a right to an abortion. The bill has passed the Senate and awaits action in the Iowa House. Click here for more information and to prepare a message to your state representative.

Many Church leaders have issued statements and taken other actions following the death of George Floyd and the resulting protests. For Catholic Church resources on racism, go to http://www.usccb.org/issues-and-action/human-life-and-dignity/racism/index.cfm.

For messages from your bishop, visit your diocesan website: