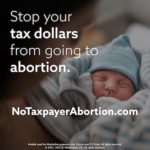 If you have a few minutes, the bishops could use your help with advocacy that is needed to ensure the Hyde Amendment is maintained in the federal budget. Without the Hyde Amendment and related policies, billions of taxpayer dollars could be used to pay for abortion in the United States and throughout the world. Please click here to contact President Biden and your Members of Congress, and also sign the United States Conference of Catholic Bishop’s (USCCB) petition at www.NoTaxpayerAbortion.com.

The USCCB has expressed deep concern about the Biden Administration’s proposal to eliminate the Hyde Amendment. The Hyde Amendment, which has been in effect since 1976 with bipartisan support, prohibits the use of federal funds for abortion, except in cases of rape, incest, or to save the life of the mother.

Everyone deserves to be treated with respect and dignity. According to the USCCB, the Equality Act, which is most likely coming up for a vote in the Senate soon, in many ways does the opposite. Instead of respecting differences in beliefs about marriage and sexuality, the Equality Act would discriminate against people of faith.

The Equality Act would: punish faith-based organizations, such as charities and schools who serve everyone in their communities, simply because of their beliefs; force girls and women to compete against boys and men for limited opportunities in sports, and to share locker rooms and shower spaces with biological males who identify as women; risk mandating taxpayers to fund abortions; force people in everyday life, and especially health care workers, to support gender transition; and expand what the government considers a “public” place, forcing even some parish halls to host functions that conflict with Catholic beliefs.

To send messages to Senators Ernst and Grassley about the bill, go to https://votervoice.net/USCCB/Campaigns/80967/Respond.

With a recent rise in the incidents across the country that have been antisemitic in nature, Archbishop José H. Gomez of Los Angeles and president of the USCCB, and Bishop David P. Talley of Memphis and chairman of the USCCB’s Committee on Ecumenical and Interreligious Affairs issued a call for prayers and unity in fostering a culture that rejects all forms of hatred.

The statement reads, in part: “The recent rise in antisemitic attacks across the nation is deeply troubling. We cannot remain silent when we witness our brothers and sisters suffering on account of being Jewish, and we will never tire of our commitment to decry every form of hatred, especially those formed in contempt of faith … This is integral to the irrevocable friendship we have cultivated and continue to build with our Jewish brothers and sisters.”

A prayer for our communities