The U.S. bishops are asking us to contact our members of Congress in support of retaining the Hyde Amendment and similar policies that prevent taxpayer dollars from being spent on elective abortions. Please click on this link today to edit and send a message.

There was some good news from the Iowa Supreme Court late last month. In another “Planned Parenthood v. Reynolds” case, the Court upheld a 2019 law that excludes abortion providers in Iowa from receiving federal sex education funds.

In its decision, the Court said, “The State presented three different purposes for the law: to express its preference for childbirth over abortion, to ensure that its state-sponsored sexual education message is not delivered by entities that derive significant revenue from abortion-related activities, and to avoid indirectly subsidizing abortion providers. Only one of these purposes must be rational for the Act to pass constitutional muster.”

The Court did not address its 2018 decision finding a fundamental right to an abortion. Speaking of which, our pro-life coalition has received some new polling of likely Iowa voters on the “Protect Life Amendment” (PLA) proposal which passed the Legislature for the first time this year. Support and opposition are in a virtual tie – 45 to 47 percent. When respondents had the opportunity to hear arguments in favor of the amendment, a significant number moved to support, resulting in a net 50-40 percent of voters favoring passage of the Protect Life Amendment.

The PLA would clarify that Iowa’s Constitution does not contain a fundamental right to an abortion.

“Second Amendment” measures passed by the Legislature this year are receiving a mixed response from Iowans. According to a Des Moines Register/Mediacom Iowa Poll, two-thirds of Iowans oppose a new law allowing adults to purchase and carry handguns without a permit.

However, a majority (51%) favor the Iowa Legislature’s passage of a proposed constitutional amendment that will allow Iowans to vote next year on adding the right to keep and bear arms to the state Constitution and that “any and all restrictions of this right shall be subject to strict scrutiny.”

On July 1, the U.S. Department of Justice announced that it was imposing a moratorium on federal executions and reviewing its policies and procedures regarding the use of the death penalty. In response, Archbishop Paul S. Coakley of Oklahoma City, chairman of the USCCB Committee on Domestic Justice and Human Development, and Archbishop Joseph F. Naumann of Kansas City in Kansas, chairman of the USCCB’s Committee on Pro-Life Activities, said:

“The Catholic Church has consistently taught that every person is created in the image and likeness of God, and for this reason we consistently uphold the sacred dignity of all human life. The U.S. bishops have also long called for an end to the death penalty, and we do so in unity with Pope Francis who has also advocated for an end to capital punishment globally.

“The news of the Department of Justice’s moratorium on federal executions is a welcome step, and we must also tirelessly continue to advocate for the abolition of the death penalty from both our state and federal laws as we build a culture of life.” 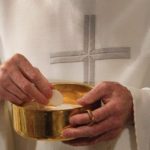 The United States Conference of Catholic Bishops (USCCB) has released some questions and answers on its vote to draft a document on the beauty and power of the Eucharist. Click here for more: https://www.usccb.org/meaning-eucharist-life-church.