The Iowa legislative session ended Sunday afternoon as the state “reopens” in the midst of the COVID-19 pandemic and protests continue on racial and justice issues.

Unfortunately, the Senate failed to take up House Joint Resolution 14 for debate in the waning hours of the session. The bill would have amended Iowa’s Constitution to permit voting by people who have completed their prison sentence after committing a felony.

Gov. Reynolds has confirmed she will implement an executive order automatically returning voting rights to this group later in the year. That’s a good thing, but it would be better to enact a constitutional amendment and not be dependent on the will of the governor. 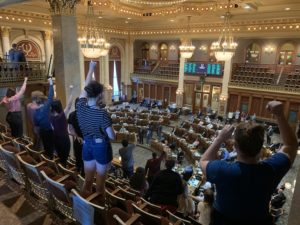 The Iowa Legislative Black Caucus votes yes for a bill restricting the use of chokeholds by law enforcement officers.

The Legislature passed a bill, HF 594, to require a 24-hour waiting period before an abortion can be performed.The “Protect Life” constitutional amendment proposal, HJR 2004, apparently did not have enough votes to pass so it was not brought up by legislative leaders for debate. The amendment, if finally enacted by the people of Iowa, would not have stopped any abortions but would have allowed the Legislature to enact regulations on the procedure. Without such an amendment in place, the Iowa Supreme Court’s 2018 ruling that declared abortion a “fundamental right” leaves the door open for taxpayer-funded abortions.

It is disappointing the amendment did not pass this year but a 24-hour waiting period is a good policy. Paired with the current requirement that an ultrasound be performed and the mother be given an opportunity to see the image of the unborn child, a 24-hour waiting period gives the mother just a little more time to consider this important decision.

HF 594 also included the “Alfie Evans” bill. It provides that a court shall not have the authority to require the withdrawal of life-sustaining procedures from a minor child over the objection of the minor child’s parent or guardian, unless there is conclusive medical evidence that the minor child has died.

Gov. Reynolds has expressed her support for the bill. It is clearly constitutional at the federal level; we will see what the Iowa Supreme Court will do if the law is challenged.

An ongoing priority of the Iowa Catholic Conference is support for parents who need assistance to choose the best educational option for their children. We were pleased to see the Legislature pass some improvements to the School Tuition Organization (STO) program, which offers tax credits for donors to scholarships for nonpublic school students. The STO tax credits are capped at $15 million.

Legislation passed at the last minute on Sunday allows the cap to increase over time to a maximum of $20 million if 90% of the cap is claimed. The bill also got rid of the cap on the percentage of tax credits that can be used by corporations. We appreciate retiring Representative Chris Hagenow (R-Urbandale) for taking the lead on this issue.

In the space of about two hours on Thursday, the Legislature passed a bill addressing issues related to policing and recent protests. HF 2647 was sponsored by leaders of both parties. The legislation:

The Catholic bishops registered in support of the bill.

In another piece of good news, HF 2259 passed the Senate unanimously on June 10 with the support of the ICC and is on its way to the governor. The legislation provides that government employees can only stay at hotels certified to have conducted training for staff on human trafficking prevention.

The Legislative passed a mostly status quo $7.7 billion budget with increases for health care and public schools. Interestingly, the bill includes a small increase ($1.5 million) in the Family Investment Program funding. This is the traditional welfare cash grant which has not increased in actual dollars for decades. A parent with two children must be earning less than $426 per month or $5,112 annually to qualify for the FIP. It is funded by both federal and state dollars.

Everyone who is eligible to vote should be given that opportunity free from unnecessary barriers. The Legislature passed some changes in voting law. In SF 2486, there is a new requirement for the Legislative Council to approve changes to election procedure. This seems to be in response to the Iowa Secretary of State’s decision to mail absentee voter requests to every member of a political party.

In the budget bill, a new provision eliminates the ability of county auditors to fill in missing or inaccurate information on an absentee ballot request from the voter registration database. Instead county auditors must call, email or mail applicants within 24 hours to obtain missing information.

If you want to want to contact the governor regarding any of the above bills, go to www.votervoice.net/icc/home.

A year ago, the U.S. House of Representatives passed the American Dream and Promise Act (H.R.6), which provides a pathway to citizenship for those who were brought to the United States as children by their parents but are not here with documentation. In the year since the passage of H.R.6, there has been no action in the U.S. Senate to advance permanent legislative protection for this population. Earlier this month, Bishop Mario E. Dorsonville, auxiliary bishop of Washington and chairman of the U.S. Conference of Catholic Bishops’ Committee on Migration released the following statement, in part:

“Today, sadly, Dreamers and TPS holders remain vulnerable and without permanent legal status. This continued uncertainty for Dreamers and TPS holders comes at a time during the COVID-19 pandemic when many Dreamers and TPS holders are, alongside U.S. citizens, on the frontlines providing essential work for our country in health care, food supply, and transportation … As we await a decision from the U.S. Supreme Court on the legality of ending the Deferred Action for Childhood Arrivals (DACA) program, we again call on the Senate to push forward with legislation that provides a path to citizenship for these individuals, who are essential to our communities, our Church and our country.”

Click here for an action alert on the issue.

USCCB PRESIDENT SPEAKS OUT ON LEGAL DEFINITION OF ‘SEX’

The president of the U.S. Conference of Catholic Bishops (USCCB), Archbishop José H. Gomez of Los Angeles, provided a statement on the decision issued earlier this week by the Supreme Court of the United States that the prohibition on “sex” discrimination in employment in Title VII of the Civil Rights Act of 1964 now prohibits discrimination based on “sexual orientation” and “transgender” status. The archbishop said, in part:

“I am deeply concerned that the U.S. Supreme Court has effectively redefined the legal meaning of ‘sex’ in our nation’s civil rights law. This is an injustice that will have implications in many areas of life.

“By erasing the beautiful differences and complementary relationship between man and woman, we ignore the glory of God’s creation and harm the human family, the first building block of society. Our sex, whether we are male or female, is part of God’s plan for creation and for our lives … Protecting our neighbors from unjust discrimination does not require redefining human nature.”

Thanks to the hundreds of you who took the time to contact your legislators during the past few days about key priorities of the Iowa Catholic Conference. It’s important to keep your legislators accountable.